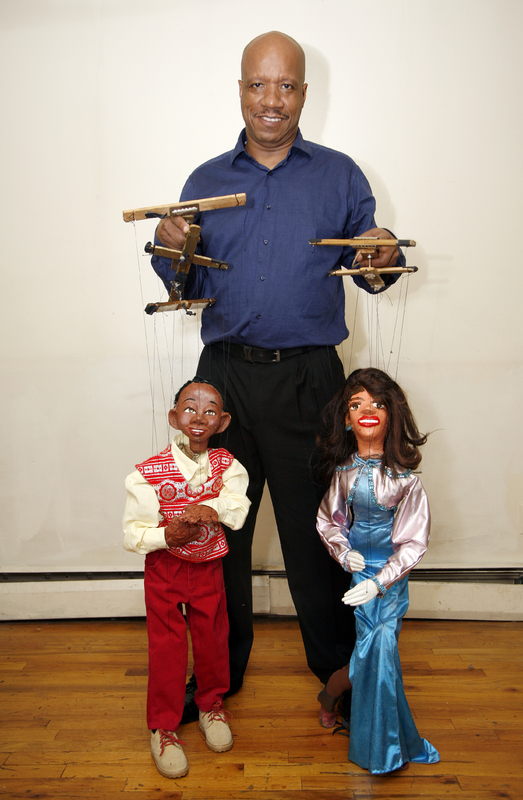 
The multi-talented Mr. Cannon does it all, from creating and performing with marionettes and various puppets, to mounting full-length productions, developing educational programs, and promoting puppetry.

Born in Harlem, as a child Bruce Cannon resonated with and was active in the fine and performing arts. In 1974 Bruce graduated from the prestigious New York City High School of Music and Art, where he majored in classical trombone. In 1975 he was granted a paid apprenticeship at the renowned Swedish Cottage Marionette Theatre in Central Park. This famous troupe of park puppeteers has been an integral part of the cultural life of New York City since 1939.  In 1997, Bruce Cannon became the Artistic Director of the newly renovated Swedish Cottage Marionette Theatre.

Early in his career at the Marionette Theatre, Mr. Cannon began to develop his own style of puppetry and entertainment that relates to inner-city children. His one man shows--Harlem River Drive, The Magic of Music, etc.--integrate music and dance with puppetry.  His credits include Lincoln Center, the Children’s Museum of Manhattan, the American Museum of Natural History, the Dance Theatre of Harlem, the Apollo Theater, the Schomburg Center for Research in Black Culture, Barnes & Noble, and more. Movies he has worked on include The Prince of Central Park (1977), The Muppets Take Manhattan (1984), and What Maisie Knew (2013). In recent years Bruce Cannon has been sponsored as a presenter by Montreal’s Festival de Casteliers and the Festival Mondial des Théâtres de Marionnettes in Charleville-Mézières, France.

Although I was trained in the European tradition, it is of paramount importance as the Director of the Swedish Cottage Marionette Theatre (a world-renowned theater) to make sure that our productions also have multi-cultural role models and characters that look like the young audiences we introduce to puppetry. We are often a child's first exposure to live theater. How did you learn your craft?
I came to the Historic Swedish Cottage Marionette Theatre as an apprentice in 1975, and by 1979 I developed my first marionette productions, Boogie Alley and A Disco Fantasy.
Name
Bruce Cannon Location
New York City, NY Date of birth
1955 Years active in puppetry
1975-present Types of puppets performed and built
Hand puppets; rod puppets; hand-and-rod puppets; shadow puppets; giant puppets; marionettes; body puppets; masks Representative productions