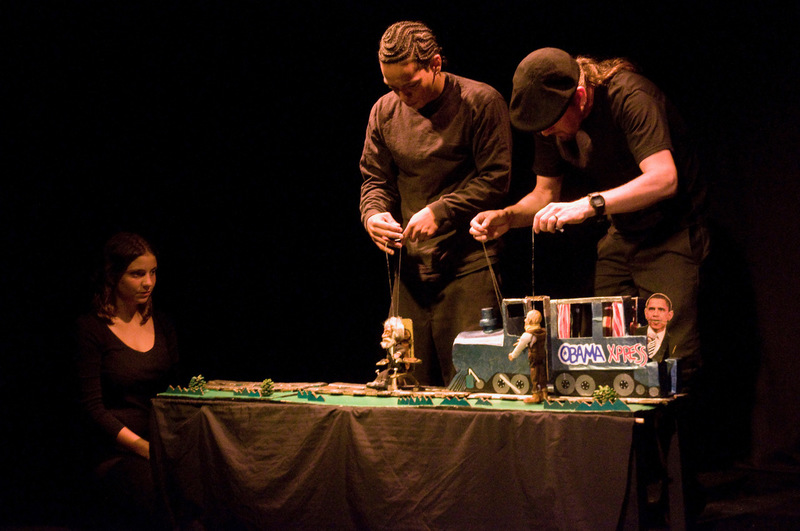 
Papel Machete was born on May 1, 2006 through intervention with masks at the “La Milla de Oro” protests in Hato Rey which occurred under the context of a government shutdown that sparked the taking to the streets of thousands of workers. Given this situation, motivated by the need to accompany and be a part of action in social struggles, this radical theatre troupe composed of workers, artists, and students, came together to generate cultural work that reflect their concerns about imperialism, colonialism, and class struggle.

Papel Machete’s performances in communities, theaters, streets, and protests employ puppets, masks, objects, and music to denounce exploitation, build solidarity, and agitate people to bring them to action in the intersectional struggles of the working class. All of their work is generated collectively. Through the use of papier-mâché as their medium, the collective explores a wide range of art forms and styles, and has created a number of characters to denounce social injustice and support the struggles of working class communities and students. Papel Machete is proud to be part of the founding and organizing committee of Titeretada, a yearly event in Puerto Rico celebrating World Puppetry Day.

Artist statement
Our work as a Caribbean puppetry group from Puerto Rico centers on the oral traditions and music of our African heritage. Our musical scoring includes salsa, bomba, plena, jíbara, and other genres of our black musical traditions. Our lineage includes the African diaspora and Caribbean traditions of storytelling which are intrinsic to the development of our aesthetics and content. However, the strongest expression of this lineage is the ancestral modes of survival and resistance which root the narratives of our creative work.

We also make a conscious effort to create and center black communities and characters, from tricksters or community leaders, to black youth with superpowers, in our effort to uplift black voices and lived experiences through our cultural work. Even though Puerto Rican constructs of ethnicity allude to our African heritage, as well as the Taino and the European, our nation lacks representation of black bodies in mass media and popular cultural, which is plagued by anti-blackness, colonial aesthetic notions, and imperialist constructions of identity, race, and culture.