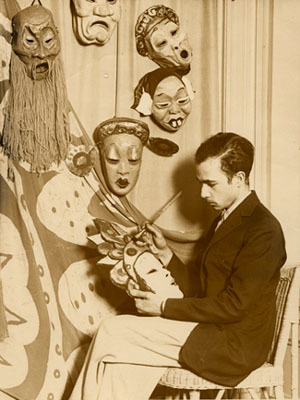 
Ralph Alexander Chessé was born in New Orleans in 1900.  His family were descended from free people of color and listed in the census as black but they identified more with their French heritage.  Although Chessé depicted scenes of African American life in his paintings, his children did not know of their African American heritage until relatives from France shared their genealogical research in the 1960s.

Except for a few months’ study at the Art Institute of Chicago in 1918, Chessé was a self-taught artist who held his first exhibition of paintings in 1919.  He moved to Hollywood in 1923 hoping to break into the motion picture industry. After working briefly at United Artists, he moved to San Francisco where he met James Blanding Sloan and began working with Sloan’s marionette shows.  By 1927 he was producing his own shows and in 1929 he opened his own theater, the Marionette Guild.

Chessé was appointed director of the Federal Theatre Project’s San Francisco puppetry division in 1935. The following year he became state director and mounted a marionette production of The Emperor Jones.  After WWII Chessé found work in television.  He created “The Wonderful World of Brother Buzz,” a children’s program sponsored by the Lathum Foundation for the Promotion of Humane Education in 1952.  Brother Buzz remained on the air for 17 years. Chessé and Blanding Sloan presented a revived marionette production of Emperor Jones at UCLA for the Puppeteers of America’s 1956 festival. All settings and marionettes were constructed by the artist, with him reprising the role of Emperor Jones. Artist statement
In 1942 Chessé wrote: “I have created my own world out of whatever I could find that suited my particular purpose. Life would be intolerable otherwise. I used my talents to express myself and at the same time eke out an existence with some compromising and somehow managed to survive. The accumulation of material things has always been an embarrassment to me, so I have tried to limit them to those things that were useful to me in my creative efforts.” How did you learn your craft?
Self-taught
Name
Ralph Chessé Location
New Orleans/San Francisco Date of birth
1900 Years active in puppetry
1900-1990 Types of puppets performed and built
Hand puppets; rod puppets; hand-and-rod puppets; shadow puppets; giant puppets; objects; marionettes; mascots; masks Representative productions
Hamlet (1928), The Emperor Jones (1928)
VIEW EXHIBITION OBJECTS