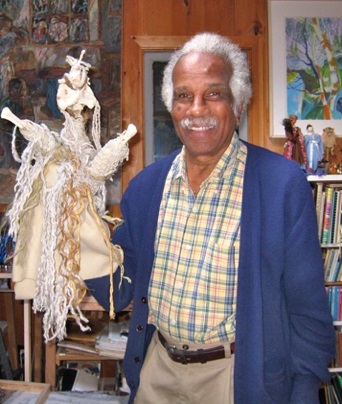 
Born in 1923, Ashley Bryan grew up in the Bronx during the Great Depression and began making books at the age of six. He has never stopped. Trips to the public library fueled his passion for storytelling from a young age. His parents supported and encouraged his creative endeavors; Bryan recollects the rich variety of paper scraps his father, a professional printmaker, brought home for him.

In 1940, Bryan was accepted into Cooper Union School of Art and Engineering, a significant accomplishment given the lack of opportunities for black students. He put his education on hold, however, when he was drafted into a segregated unit of the U.S. Army in 1943. Assigned to the 502nd Port Battalion, Bryan took part in the Normandy invasion, landing on Omaha Beach on June 9, 1944.

After the war, Bryan completed his education at Cooper Union. He later studied philosophy at Columbia University, and went to Germany on a Fulbright scholarship. It was there and in France that he saw large costumed figures celebrating Fassnacht and Mardi Gras, which provided the original inspiration for his puppetry, which later was augmented by African ceremonial costumes. Though best known for his children's books, puppetry has been very important to him.

Artist statement
In that my puppets have an African lineage formally and participate in telling African folktales--they have a close connection to the lineage of African American puppetry. How did you learn your craft?
Self-taught–simply recombining found objects.
Name
Ashley Bryan Location
Islesford, ME Date of birth
1923 Years active in puppetry
1950s-present Types of puppets performed and built
Hand puppets Representative productions
I used my puppets in storytelling in a relatively informal way–often school visits or impromptu presentations. Website
https://ashleybryancenter.org/
VIEW EXHIBITION OBJECTS